The Secret Weapon for Fort Collins Migraines and Headaches

Frustrated with severe migraine or headache pain that will not go away?

In 1989 I took a one-week seminar in Omaha that proved to be one of the most valuable programs I have attended in my 24 year career as a chiropractor. I studied an osteopathic treatment designed to clear meningeal torsion inside the cranial cavity, or skull.

Using this method I have helped countless people solve their headaches and migraine struggles. The best part is that the very first patient I used this treatment on was a woman who suffered with migraines for 14 years who would later become my wife.

If you suffer from migraines or headaches, despite constant stretching and exercise, please read on.  If you have seen a chiropractor, neurologist, or other doctors and still find you have not gained any permanent ground, there is a chance you may have torsion on the meningeal system. People with meningeal stress frequently do not respond favorably to chiropractic treatment unless the meningeal torsion is released first. People with Fibromyalgia also respond to this treatment.

At the time I first tried the Cranial treatment with my wife, she had tried 6 other chiropractors and was treated by every type of medical specialist imaginable. She was taking 12 prescription drugs at once, 3 of which had migraines as a side effect. The chiropractors found her spine to be rigid like a board and still tried to “adjust” her. Her experience was severely painful and even agonizing. It wasn’t until I released the meningeal system that she experienced relief. After doing so, the spinal adjustments that were previously impossible were now comfortable and gentle; the joints released like warm butter.

Please read the detailed explanation of this treatment method. I hope you find inspiration and an opportunity for resolution of your problem. 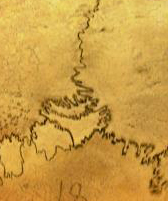 Skull/Cranium: The skull has a total of 22 individual bones (8 cranial and 14 facial). The joints or connections between individual bones in the cranial system are called wormian bones. When functioning normally, these joints actually have some movement, similar to the expansion joint found on a bridge. Essentially the joints expand and contract. 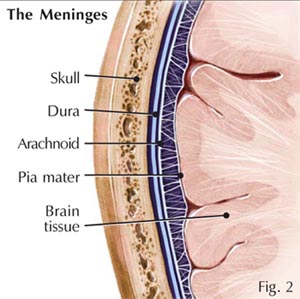 Meninges are membranes that cover and surround the central nervous system, including the brain and spinal cord. Meninges consist of 3 layers. An outer fibrous layer called Dura Mater attaches itself to the bone of the skull and inside the spinal canal. A delicate inner layer called Pia Mater attaches itself to the brain and spinal cord. The middle layer called Arachnoid Mater acts as a cushion to protect the nervous system.

Overall the meninges offer protection, and a nutritional fluid pathway for the nervous system. They also act as somewhat of a trampoline to cradle the brain.

Migraines & Headaches: Meningeal Torsion – The Source of Pain
When meninges shorten and contract, they get tight and rigid, acting like muscles that go into spasm. When this happens, the attachments to the skull and spine cause a tug-of-war battle inside the skull and spinal column. The person experiencing this often has severe and often shooting pain, sometimes specific to one or several areas. Stiff tight muscles with limited flexibility are also common.

The Cranial Treatment
A cranial evaluation tests the degree of subtle motion in the cranial joints and checks the elasticity of the meningeal system. If limited motion is found, this is an indication that meningeal torsion is present. The treatment facilitates improved motion by placing gentle pressure on specific areas. Deep breathing by the patient during the treatment frequently improves patient response because the joints expand and contract during breathing.

The objective of cranial adjustment is to release torsion on the meningeal system.  Patients are often mystified with joy and tears when years of migraine and headache pain miraculously go away before they leave the treatment table.  Treatment takes approximately 10-15 minutes.

What To Do Next

Very few chiropractors use cranial adjustments as part of their treatment offerings.  As a result, some people will drive or fly to Fort Collins in order to seek the help of a treatment method that is truly different and provides outstanding results.

Meningeal tissues in a state of stress or torsion and left unaddressed can lead to the worsening of pain and even disability. If you are suffering and have tried other treatments with limited results, you owe it to yourself to find out if Cranial Meningeal Release Therapy can help you.

We have helped extinguish migraines and headaches from patients suffering with them for 30 years. Fort Collins migraine and headache patient testimonials can be found in our office binders and on our walls.

Frustrated with severe migraine or headache pain that will not go away?

Call our Fort Collins migraine and headache center at 970-493-3100 and schedule an appointment today. We offer a complimentary 20-minute consultation including free x-ray/MRI review to determine if we can help you. Sit down with Dr. Gil and see how you feel working together. No strings, No pressure. No charge. Simply our experience working to help you.

This entry was posted in Fort Colllins Chiropractor. Bookmark the permalink.